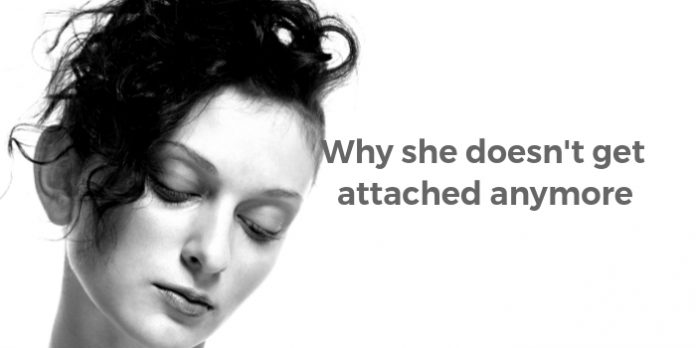 Many couples endure from routine to abuse thinking that, to detach from someone, they will not find love again. Sometimes, without realizing it, we stop suffering for a person that gives us more sadness and pain than happy moments.

It is often harder for women to detach, then a harsh difficult lesson is learned that opens her eyes…

She doesn’t get attached because she learned that not everything is hers to keep. That there are blessings in letting go and goodbyes and releasing whatever was holding her back. She knows that the more she is attached to something and afraid of losing it, the more she will push it away because she’s only focused on rather than giving.

She doesn’t get attached anymore because she’s tired of people pulling away, people changing their minds, people leaving, people not knowing what they want or what they’re looking for.

She doesn’t get attached but she still knows how to love. She’s finally accepting that they’re not the same. She’s finally learning that if you really love someone, maybe releasing them is the expression of love. Letting them be who they truly want to be or be with the partner they’ve always wanted. She’s finally learning that if she’s meant to be with someone, they’ll both kind of attach to each other by default, like a magnet, without anyone pushing or pulling, without anyone detaching and without any need to control one another.

She doesn’t get attached anymore because she’s finally learning that everything is temporary and maybe the whole point of love is just to enjoy it while it lasts instead of trying to cling to it forever.

“Without your love I am nothing,” these are the words of a person who suffers for blind love. If you are one of those people who talk like this, or worse, of those who feel identified with them … Beware! You run the risk of being in the huge group of people who do not know how to love in a healthy way.

You have to understand that to love in a healthy way, even if it sounds cliche, one has to start by loving oneself and knowing that happiness does not depend on someone or something external. The happiness is inside us.

Being aware that nothing is forever, not only helps to have a healthy relationship, but it will make it much easier to detach from it if at any time it becomes a toxic relationship.

But when do we know that things start to fail? When you know that you have to bail out and you don’t do it, or they mistreat you and you are still there because you think that nobody else is going to love you, or because of fear of loneliness.

“I CAN’T LIVE WITHOUT YOU”

We are used to saying or expecting to be told things like: “I cannot live without you”, “I do everything for you”, “You are my whole life”, “If you leave, I’ll die”. These are the most romantic phrases that come to mind, but if we think about the content of these phrases, we realize that we are transmitting a sickly love. Be very careful of the music you listen to as many of the songs that have these romantic phrases are not necessarily healthy for our mental health. These are words that we really enjoy but that are not always true enough when someone hurts us and can often just sink us more in the pain.

There are also couples who endure and that’s no very healthy: enduring someone is not a healthy relationship, because love does not have to be sacrifice, it has to be joy. If not, you’re with the wrong person or in the wrong place. ”

And that’s where the concept of attachment comes in, that feeling that will sooner or later bring suffering, because in one way or another it will control your life. It is often confused with love and the worst thing is that, often, it is not even the attachment to a person but to an idea, for example to the idea of ​​having a partner.

First of all you have to be realistic: when you see reality as it is, it has the property of healing you. No deception, no self-deception, no bias, no misinterpretation. You have to be realistic even to remember a relationship that has ended, with the good things and the bad things. It is not easy because we process information through our schemes or emotional state, but it is necessary to do so in order to be able to say calmly: “This is over and it is in the past, life continues”.

But beware! Detachment does not mean indifference either. The idea of ​​not sticking does not mean not having relationships, but having them without worry. It is not to be afraid to give affection: I link myself without fear of losing you. I link myself without fully identifying with you. I take care of you, but I’m not obsessive. And again: I love you, but I do not need you.

The difference between genuine love and attachment: